Being in persistent atrial fibrillation is sort of like being a pickup truck with a four speed manual transmission, but you can only use second and third gear.

I’ve always been a larger runner, and that’s definitely a factor in being slow. I’ve done a dozen marathons at over 6′ 3” and about 235 pounds, and have often felt that people would “mark” me, use me sort of as a target. I’ve felt particularly self-conscious about those people, often found in the back of the pack in a marathon, who will run up and pass me and then start walking – over and over again. This can be really annoying. One guy did that for 14 miles! I finally told him, “please either keep running or keep walking.” I know that these people are simply followers of Jeff Galloway (there are a lot of them in the back of a marathon pack), but it’s still annoying and it happens every race.

But if I was moderately slow before, I’m silly slow now. In an effort to preserve my pace I have actually lost about 40 pounds – but I don’t think I’ve even broken even. I had previously ran ten minute miles in shorter training runs, but now twelve minute miles are more common. As stated previously I had a cardioversion and was in sinus rhythm for thirty-three days – and at my new weight I was delighted to be able to train, for shorter runs, at a nine minute mile if I wanted to – but alas after a quick five-mile run in the thirty-third day I went back into persistent atrial fibrillation. I could feel it immediately and knew what had happened.

There are a few major differences, however. Prior to atrial fibrillation, like most runners, I would start out a long run at a fairly quick pace and more or less degrade as far as my pace was concerned as the miles accumulated. But with atrial fibrillation I actually start out quite slow, and after a mile or two find that I have picked up the pace quite a bit. I generally don’t do much interval training, but I imagine that is out of the question at this point. I live and train in the mountains and I can still run hills, but not really very quickly. When bicycling I find I don’t stand up and charge up hills any longer, but remain seated and spin more.

Being in persistent atrial fibrillation is sort of like being a pickup truck with a four speed manual transmission, but you can only use second and third gear. You start out pathetically slow, and your top speed is greatly diminished – but she can still drive as far as you want.

Big Slow Runner – Before A Fib

The most important thing, of course, is that I am still able to continue trail running and mountain biking, and I am still able to participate in marathons and even ultra marathons. I still get to experience the sheer joy of slogging through a long trail run through the forest. I was never going to win any prizes to begin with, so what’s the difference?

Actually, I was delighted to get a medal for second place in my age group at the 2012 Bizz Johnson 50K, which I ran while in persistent atrial fibrillation. That was the first year they had a 50K at that event and there weren’t very many participants. I’m pretty sure that there were only two people in my age group, but still! 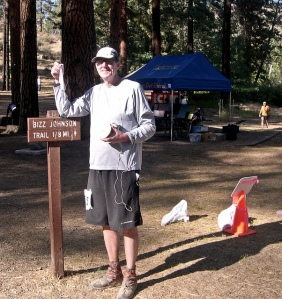 One good thing about ultra running and marathon running, especially compared to 5Ks, for example, is that nobody really cares if you are slow. I was surprised that there were many people who finished behind me when I ran my first 50K in atrial fibrillation. Although it is kind of embarrassing to be so slow, you just have to change your mindset, and when you get involved with ultra sports, especially with atrial fibrillation, you need to simply enjoy yourself, enjoy the run, enjoy the trail, enjoy the people, and not worry about time.

If there are any other athletes reading this who are in persistent a fib, or intermittent a fib, I would love to hear about your experiences, and I encourage you to leave comments.

213 thoughts on “On Being Slow – Running with Atrial Fibrillation”