I have been in permanent atrial fibrillation for a couple of years now, but only been taking an anticoagulant (Pradaxa). But things have changed and for the past month I have been on a beta blocker, carvedilol.

Prior to starting the carvedilol, while in permanent atrial fibrillation, I had been able to run two marathons and one ultramarathon (50K) without any more trouble than the normal marathon type suffering, but over the past six months I have noticed things have been changing. I’ve slowed down, even for me, and distances are getting harder. My last half marathon was a joke and I was at the end of the pack within the first two miles. After a run or mountain bike ride of an hour or more I would have problems afterwards – my blood pressure would drop and my pulse would stay high. After a long run, especially if it was a hot day (which they all are, recently) I would get so light-headed after standing up I sometimes had to grip onto something to remain standing.

A visit to the cardiologist, and a subsequent echocardiogram, revealed that my heart rate was increasing and my ejection fraction was decreasing, and for that reason the cardiologist wanted me to start on a beta blocker.

A beta blocker, in this case carvedilol, is a drug that reduces stress on the heart by slowing the heart rate, decreasing the force with which the heart beats, and reduces the tone of the arteries throughout the body. The end result is that blood pressure is reduced, as is heart rate. The heart needn’t work so hard.

Some non-endurance athletes actually use beta blockers as performance enhancing drugs – it is said that it calms a person, reduces performance anxiety, and is commonly used in less endurance specific sports such as golf, target shooting, archery, and even in music performance.

Clearly these drugs are performance diminishing for endurance sports like distance running and mountain biking. We like to stress the heart, raise the heart rate, and we don’t have very much stress – we’re long distance runners after all – the mellowest people around.

I generally am in at least half marathon shape year round. Even if I’m not training for anything my weekend long run is going to be between nine and twelve trail miles. Prior to starting the beta blocker I had signed up for the 15K at the SOB Trail Run at Mount Ashland (Oregon) – one of my favorite races. This relatively high altitude run is basically all up and down trails and fire roads (zero flat sections) and I have done it at least six times in the past, including completing it twice in atrial fibrillation. I was curious to see how being on the beta blocker would affect my race. 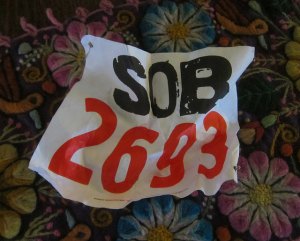 The answer was I DNFed (did not finish) and dropped out fairly early in the race. That was terrible – most of my friends were running the 50K or the 50 mile and I DNFed the little 15K???

The course at the SOB is brilliant, really. A lot of trail races start out right away on singletrack, but the SOB has about a mile(?) of fire road at the start so everybody has plenty of time to figure out whether they are going to be running with the fast people or the slow people before they hit narrow Pacific Crest Trail. I ended up at the very back of the group that was running, but I was still in front of the few people who were walking the 15K.

I found that as soon as the course headed up hill I was unable to run. My chest felt funny – not chest pain, just felt weak, not right, and my legs felt dead. I wasn’t short of breath, I was just unable to do it. I decided, in my typical OCD mode, to continue running for five more songs on my iPod shuffle, and then turn around and drop out, thinking that I should at least get a little bit of a work out in, and that I could justify keeping the T-shirt I had paid extra for. I knew I could have walked the course, but that is not what I went there to do.

I was delighted that the fifth song on my iPod turned out to be an oldie from my high school days: Yours is No Disgrace by Yes. Not actually I song I still like very much, but in this context it seemed like a cosmic pat on the back.

http://youtu.be/Vd4jeeu90Rk
A Cosmic Pat on the Back

On the way back I met a woman who was also DNFing (sprained ankle) and we walked the last section of the race together, commiserated, and removed our numbers so they wouldn’t mistake us for the top finishers. At the finish line we informed the race officials that we had dropped out so they didn’t need to send a search and rescue team to find us.

DNFing and commiserating together as we remove our race numbers

So this article is, basically, my first impression of being on a beta blocker, in addition to the atrial fibrillation, and trying to remain an endurance athlete.

I should say, on a positive note, that the beta blocker is working, and is doing what it is supposed to do. I check my heart rate and blood pressure at least once per day and since I started the carvedilol I am right where the cardiologist wants me to be. And I can understand why people who aren’t trying to be athletes might like the med – it seems to have a mild calming effect. Furthermore I no longer feel like my heart is a fish flopping around in my chest, and my post work out blood pressure and heart rate has stabilized.

I am optimistic that the carvedilol will be worthwhile and will help me preserve and regain my ejection fraction. But really, what choice do I have?

So here is how things have changed so far (compared to just permanent a fib without the beta blocker):

1.) As far as mountain and road biking is concerned I have been able to ride all the hills that I used to be able to ride, although I am much slower. My wife now has to wait for me at the top of a climb, and that’s fine. I am delighted I can still ride and don’t have to get off and walk my bike.

2.) Running is more negatively influenced. My previous slow pace is even worse, and hills are quite difficult. Not surprisingly I do not like this one bit. A slow jog feels like a 5K effort. But I am still able to run – Yay!

3.) Long runs in heat are not possible. I am just not able to do a long run in heat, and lately every day has been warm. Understand that I am a big red-faced Irish-American who considers anything over sixty degrees to be hot running weather; plus I live in a very sunny place, a high desert climate without a lot of shade. It is not surprising that this is happening. A normal person running in heat will have a higher heart rate for a given pace, and will need to slow down. If you are on a beta blocker that reduces the maximum heart rate by a significant amount, well: “game over.”

My goal is to continue running and mountain biking on trails like this: Brown Mountain Trail

4.) I suspect that the beta blocker might be making me lazy. I don’t know if that is the right word, but I had a full day off in the middle of the week a while ago and I had planned on, among other things, writing this article and going for a trail run, and next thing I knew it was late afternoon and I hadn’t done a thing. What? By that time there was a thunderstorm so I was not going out for a run – but the article still hadn’t been started. I hope this is not going to be the case from now on. Being lazy and depressed is far from my idea of fun.

I am going to wait until I have had more experience with the beta blocker and write a better informed article. I’m going to sign up for a relatively flat (downhill, actually) trail half marathon and try to redeem myself.

In the meantime I would love hear about other people’s experiences with the dreaded beta blockers. Please post a comment below.