The only specific treatment I take with respect to my atrial fibrillation is a blood thinner. I am on Pradaxa which for me, I believe, is a better choice than no anticoagulation, aspirin, or Coumadin (warfarin). 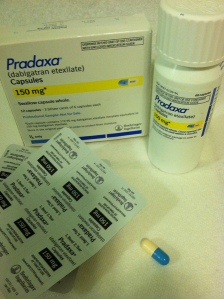 Some of my Pradaxa

One of the worst things that can happen to a person in atrial fibrillation is that blood clots can form in the atria (plural of atrial), and can then release and become lodged in the brain. Since the left atrium is not really beating, and in my case it is quite enlarged, blood tends to pool here and this is perfect conditions for forming a blood clot. When a blood clot becomes lodged in the brain that is called a stroke or a cerebral vascular accident (CVA) and should be avoided at all costs. I actually met two different people, in one week, that had had strokes secondary to atrial fibrillation, and both of them were in their 50s. Both of them, regrettably, were lackadaisical about taking their anticoagulant at the time of their CVAs. Having a stroke, if you survive it, is an extreme life-changing event – definitely something to be avoided if possible.

Some people do not take any blood thinner at all. If your CHADS2 score is zero this is an option. My CHADS2 score is technically zero, but because of my severe left atrial hypertrophy my doctors think it is best that I am anticoagulated, and I fully agree.

What is meant by a CHADS2 score? Here is a link that explains, quite well the CHADS2 score:

Basically you get one point each for having congestive heart failure (C), being hypertensive (high blood pressure) (H), being seventy-five years of age or over (A), being diabetic (D), and you get two points if you have had a previous history of a stroke (S2). And it even spells CHADS2!

So, for example, if you are a ninety-year-old diabetic with high blood pressure and congestive heart failure, and you have already had a stroke, your CHADS2 score is maxed out at six points. Yes, you should definitely be on a blood thinner.

If you are a forty year old non-diabetic, non-hypertensive cyclocross racer who has demonstrated episodes of atrial fibrillation, but have no other risk factors, then aspirin, or no anti-coagulation at all, could possibly be an option.

If you have atrial fibrillation is important that you discuss this with your doctor and listen to what he or she has to say. I’m not giving medical advice here, I’m just explaining the system.

There are four choices regarding anticoagulation, and the choices are 1.) no anticoagulation 2.) aspirin, 3.) Coumadin,  and 4.) The newer, more expensive, but more convenient anticoagulants such as Pradaxa, Xarelto, and Eliquis.

Coumadin is relatively inexpensive, but interacts with a lot of different medications as well as a lot of different foods. I am a vegetarian and I eat a lot of green leafy vegetables which would make Coumadin a difficult choice for me. Also when I previously took Coumadin for six months after my open heart surgery I was having migraine headaches nearly every day. I rarely have a migraine since I discontinued Coumadin nearly 20 years ago. I don’t take any other medications, but if you do take other medications there’s a good chance that Coumadin may interact with them as well. Coumadin also requires frequent blood tests in order to make sure your anticoagulated at the proper level. Pradaxa and Xarelto do not require any blood tests. The disadvantage, and this is a big disadvantage, is that Coumadin is reversible if you do develop a serious bleeding episode whereas Pradaxa and Xarelto, for all practical purposes are not. It is possible that Pradaxa and Xarelto may be reversible with dialysis; but how likely is that????

Pradaxa is taken twice daily, and Coumadin and Xarelto are once daily. My doctor put me on Pradaxa after I was shown to have persistent atrial fibrillation. I have been taking it for over a year and really have had no problems. I’ve crashed my mountain bike just a couple of times and really haven’t noticed much difference as far as bleeding or bruising is concerned. But these were low-impact crashes and I realize there are some real dangers associated with anti-coagulation. It is important that you discuss this choice with your own health care provider. 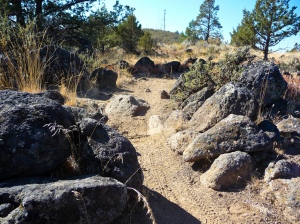 By the way – I am fully aware that there are a zillion commercials for suing the “bad drug” Pradaxa – but I am convinced, that for me, my diet, and lifestyle, Pradaxa is safer than Coumadin.

13 thoughts on “Pradaxa and CHADS2”