I saw some recent Pearl Izumi ads posted on The Trail and UltraRunning group on Facebook and thought I’d comment.

There are a number of Pearl Izumi ads that make fun of slow runners, here are two examples: 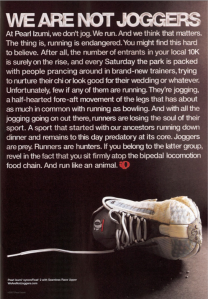 The remaining ads can be found on this excellent blog:

Short, Round, and Fast

One of the nice things about endurance sports, from half marathon and up, is that most participants do not have this type of attitude. It is a live and let live culture. It seems like half marathons in particular are a plce where you generally see conspicuously non-athletic looking athletes – and good for them!

Half Marathon Participant – Right on!

But I’m certainly not going to stay home, and I’m going to remain a trail runner, even if I’m slow, and I still plan on signing up for distance events. At my last half marathon I was very surprised to see almost the entire field, including people who would previously never had been in front of me, pass me, get smaller, and disappear from sight. In the first two miles. Not fun. I was thinking, “Whoa, where’d everybody go?”

Contrary to how it might appear to faster runners who are observing slower runners, it’s not always easy being slow. It might actually be more difficult. Yesterday on a four mile trail run, my first run on the beta blockers (more on that later), I rounded a corner and saw another runner behind me. He was an individual who I had seen at the trailhead, who appeared to be a bit older than me, and who was wearing jeans and a long sleeved shirt on a ninety degree day. I thought, “Oh man, I don’t want to get passed!” and I cranked up my speed. I don’t think I was running fast at all, maybe about a ten minute mile, but the burning in my lungs and legs felt like a fast 5K. “This is ridiculous!” I thought, saddened. This is “fast” for me now.

But that is my new reality.

As far as Pearl Izumi is concerned they evidently think that being assholes, and creating some controversy, will make their ads stand out. They may be correct. There are a lot of competitors out there, they have an extremely small market share, and it is said there is no such thing as “bad publicity.” I knew that they made shirts, and jackets; but until now I didn’t even know they sold shoes.

One of their ads last year, which featured a runner who ran so fast in his new Pearl Izumi shoes that he killed his dog, made quite an impression. Of course they apologized and had their (unfunny) ad featured in news stories and blogs for weeks.

By the way, my main nylon running jacket is made by Pearl Izumi. I like it, it’s a good jacket. I’m not going to boycott them or burn the jacket, or anything like that. I just want to say in this blog that slow runners are probably slow for a reason – and that reason isn’t necessarily poor character or laziness.

Me – Lazy jogger with atrial fibrillation after a twenty mile training run. I ran so slow that my dog survived!

Or even if the slow runner does have poor character, or is lazy, well, what’s it to you?

And guess what – Pearl Izumi got three of their ads posted in my little blog (and elsewhere) – for free!

10 thoughts on “Running with Atrial Fibrillation – It’s Okay To Be Slow! Forget The Pearl Izumi Advertisements”