This is an amazing story from a British AFib Runner, Mike Munson. This guy is truly hard-core and persistent. Non-runners who read this will be shocked, but I think most endurance athletes with atrial fibrillation will “get it.” Mike has been a gifted athlete over the years – his times when he was having to walk and jog because of an AFib attack are probably faster than my PR times! He initially dealt with attacks of atrial fibrillation, and eventually had to deal with (probably unrelated) cardiac arrest and coronary artery disease. Please feel free to comment. Thanks for sharing your story, Mike!

I had run regularly since about 1964 when I won my local district schools 1 mile in 5m 4secs (aged eleven) on a grass track, bare footed (the school did provide spikes but they hurt my feet). I joined my local Athletic club at twelve, running Track & Field in the summer, Cross Country in the Winter at County & National level. After University I worked in Africa but ran hard most days and started running slightly longer distances in hot climates in Central Africa (ie 10km & 10 Miles). I didn’t race much but did my first 10k in Lagos, Nigeria.

On returning to the UK in my mid 30’s and just starting a family I eased up on the intensity of my training but still ran most days and competed regularly for my local Running Club. As a club we had an internal “Grand Prix” where we competed against clubmates of similar ability.

In late 2000 (aged 50) I was taking part in the last 10km of the year, a relatively easy course that would normally have taken me about 40 mins to compete. I was a very consistent runner and usually started slower and ran negative splits. On this occasion I found myself collapsing for no apparent reason within a few hundred metres of the start. As it was the last run of the series (& I am not one to give up anyway), I picked myself up and initially started walking then broke into a jog, but very quickly had to stop again. I had no idea what was happening but by stopping and walking and jogging very slowly I eventually got round but really collapsed at the finish in around 60min . I went to see my GP the following morning and she sent me straight to Hospital. On doing a test on the treadmill they noted I had an irregular heartbeat, but didn’t do anything about it.

Over the next few years the attacks increased from every few months to every few weeks and seemed to be quite random, although I tried to work out if by running at a particular pace or warming up longer would help. If an attack occurred in a race I tended to stop  and walk to the finish as I was coaching youngsters and didn’t want them waiting around too long for me  if I ran to collapse . 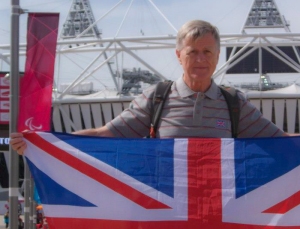 In 2006 I moved to Suffolk and introduced myself to my new GP who happened to be a runner. He immediately referred me to a Cardiologist at the local Hospital who had me tested immediately and then transferred me to Papworth (Our Regional Cardiac Centre). They carried out an ablation which unfortunately didn’t work and I still have AFib. However I was given medication (Flecainide ), this had side effects of dizzy spells and blackouts which became very regular. Some of my friends found me a bit blasé about my collapsing and I was often heard to say to a fellow runner who might have stopped to help me, “Oh it’s no problem, I just have a heart problem.” Sometime they would be very shocked but would still try to encourage me to get up quickly and run fast to the finish but all I ever wanted was to get to the finish at my speed, which sometimes could be quite fast and sometimes I would be walking through the line. I became incredibly inconsistent. Over the past 25 years I have been in clubs that had 5km handicap championships each summer. Previously they would very by under a minute over the season but latterly on a good day (prior to going on beta blockers) I could vary from 22 to 31mins, depending how many times I collapsed.

All this time my pace was getting slower as I was unable to train properly (ie more than I would have expected due to my getting older), although one time I spoke to my GP about it an she said “don’t you realise you are getting older” to which I replied yes but I am slowing down too much!

Therefore I turned to trail running with self navigating. This became very enjoyable and I particularly enjoyed the refreshments at check points, however by 2013 I was getting concerned about my ability to compete longer events and started collapsing and feeling sick if I tried pushing the pace at all. I spoke to my GP who arranged a 24 hour monitor. During this period we had our club 5km championship so I was happy to test myself with the monitor on. Please bear in mind I had been assured that  Afib wouldn’t kill me by my GP.  About 400m from the finish I had a black out  and I went down. A friend was just behind me, checked on me, I had come to and told him I was OK and would walk to the finish. He informed the next official who advised him I was now just behind him. In fact I recovered so quickly I actually overtook him before collapsing again near the finish. I returned the monitor to the Hospital the following day and soon after getting home a Consultant called me to come in immediately but I shouldn’t drive. I was kept in for tests, but in the end they changed my medication to a Beta blocker, which did stop the dizzy spells and blackout, however, my pace in training immediately slowed further from around 8 minute mile to 10 minute mile.

I was then doing more Trail Marathons as it didn’t seem to matter what pace I ran and was good fun, whilst still a challenge and hopefully keeping me fit. 2016 & early 2017 I found when doing easy Trail Marathons increasingly I was struggling over the last few miles, even contemplating taking short cuts, not wanting to cheat but just to finish. I did actually collapse twice at the finish and on one occasion the paramedic suggested going to A&E but I felt I would be OK in the morning (and of course I was).

Then 4th June 2017 I was in the 25th mile of the Stour Valley Trail Marathon (a fairly tough race with several long hills which was my 7th Marathon of the year) on one of the warmest days of 2017 in England, when I collapsed with an SCA (sudden cardiac arrest). Apparently this may be nothing to do with my Afib.

I had an ICD fitted and it has triggered twice since (during runs/ long walks as I am supposed to be taking it easy) and I have now had a double bypass as 2 arteries were narrowed. I am now doing Cardiac Rehab and hope to get back running soon, but will be patient (especially after dying last year for 25 minutes). However the Afib is still with me and I am still on 3.75 mg Bisoprolol.

However now my wife carefully vets anyone giving me a lift. The guy who gave me the lift on that fateful day is still not allowed to drive me.

The local running community have been great. As I lost my driving licence friends have driven me around. As I could run last winter the local Cross Country League have let me walk the ladies distance. Unfortunately my last collapse meant I missed the penultimate race as I was in Hospital, so as race Director I was busy sending messages out to get the race on. At the Presentation night I was given a special award which was very humbling. I was the first recipient of this award named after a regular runner who had passed away in the previous season.

This summer as I have not been allowed to run I have been raising money for local cardiac charities by organising 21 Trail runs in my County on Wednesday evenings, starting at a Village Pub and using Public Footpaths. It is a simple concept whereby we sell an instruction sheet for £2 and runners self navigate round one of 2 routes either short (maybe 3-4 miles) or longer 6 + miles and then finish at the Pub. We sometimes put on additional things, like one night we tested people for AFib before they set off. This was well received and 120 people turned up; however I was the only person testing positive for A Fib! It created a fair amount of awareness and we managed an article in our Regional Daily.

Is this the sort of thing you wanted to see?  My family have been very supportive of me as they saw me in Hospital with tubes in me etc and where told that maybe I wouldn’t survive the induced coma and if I did as I was out for 25 minutes I might have brain damage but I seem to be very lucky!