I am considering participating in the 2014 Oregon Outback bike tour. I love the concept of the Oregon Outback tour – it is a 360 mile unsupported bike tour, most of which is on remote dirt roads (and trails) in the barely populated Eastern part of Oregon (commonly referred to as Oregon’s Outback).

The best part is that the beginning of the ride, the first seventy five miles or so, is on the OC&E Woods Line State Trail – a 100 mile long Rails to Trails project that is a long, narrow Oregon State Park.

I live near and use the OC&E trail a lot and have trained for about twenty (?) marathons on it, and frequently ride bikes on it as well.

I’ve logged thousands of miles on The OC&E – not really because of the scenery, but mostly because it is nearby, the ideal surface, the mile markers every 1/2 mile, and because it is a place where I can run with my well-trained dog off leash. Plus I’m totally used to it.

I have a ton of photos in my Flickr set.

The trail was originally a logging railroad, beginning in 1917, and was used by Weyerhaeuser to transport logs and lumber from Bly, Oregon (where they once had a sawmill) and areas East of Klamath Falls to their main mill and the main railways in Klamath Falls. As everybody know the logging industry isn’t what it used to be and the railroad was shut down and “rail banked” in 1992.

I can give a little background on the development of the trail – I was part of the original group that developed the trail back in 1992. There were about nine of us that were part of an organization supporting the trail and we had plenty of opposition. Most notably there was an opposing group consisting 150 well organized adjacent land-owners that fought the establishment of the trail. They gave a number of reasons for their opposition, including a lot of concerns for privacy, and worries about potential criminal activity on the trail; but I always felt the real reason was that if the land wasn’t rail-banked the adjacent land-owner would get all the land back for free – that’s a strip of land 100 feet wide and about a hundred miles long.

Ringo on the Roof

I never really thought the trail would happen. There were other groups opposing the trail including a group that wanted to leave the rails in place and build a recreational railway – train rides for tourists. We never even bothered opposing that idea because we knew that Weyerhaeuser had already sold the ties and the rails for the highest price ever to a salvage company – 4.5 million dollars (1992) and the excursion train people would have to buy them back from the salvage company. I don’t think they had anywhere near that kind of cash.

Probably the least pleasant group opposing the trail was the Nature Conservancy. They own a large portion of the Sycan Marsh where the Woods Line portion of the trail passes. This is the most remote and least used portion of the trail. The biologist’s concern was that the train tracks, which are on a raised ballast, divide the wetland into two distinct eco-systems with slightly different gene populations – certain creatures couldn’t cross from one side to the other. I never quite understood why that was a problem, but evidently it was. For some reason we thought the Nature Conservancy would be in favor of a recreational trail – after all they are a nature conservancy, and who doesn’t love nature, the great outdoors, hiking, etc. – but no – they wanted the entire rail ballast removed and NO TRAIL.

When I saw the photos of the tour directors of the Oregon Outback wading through the water in the Sycan Marsh I immediately understood the purpose of those breaks in the trail – that must’ve been a compromise with the Nature Conservancy. Now the little creatures can frolic and canoodle with the little creatures from the other side of the tracks – brilliant!

Anyway – given all the opposition to the trail I never really believed it would happen; but it turns out the trail became a reality in 1992. The way I see it the real powerful people in the world (like the railroads, the power company, telecommunication companies, etc.) liked preserving the right of way so they could rebuild railroads, or put up power lines, or communications cables, or whatever, without much problem. That’s the goal of rail banking – to preserve the right of way for projects like railroads, pipelines, telecommunications – and little community forums and debates are, I believe, just for show – big companies run the world. It makes sense – after seeing the level of opposition the adjacent landowners raised for the trail on existing right of way it would be unimaginably difficult to build, say, a pipeline through that property if they owned it – it would take years of lawsuits and expensive land purchases. One hold-out landowner could cancel an entire project. Rail banking makes it less complicated.

And in the case of rail banking outdoor enthusiasts benefit. And the community can benefit when folks like the Oregon Outback group or Cycle Oregon decide to use the trail.

I was fortunate enough to tour the trail via one of those trucks that rides on rails after the railroad was closed but before the rails and ties were salvaged. It was a wonderful day and a chance to see the entire route in one morning with a picnic lunch in Bly, Oregon to boot. Our group did a similar tour of the Woods line portion but for some reason I missed that one. I still want to get out there and see the large treacle that remains from the railway days.

Jan and Her Sister-in-law

The trail has quite of variety of personalities. The first one and one half mile is unpaved (last time I was there) and passes through an industrial area, including some switching yards and some transient camps. This area is infrequently used by joggers, etc.

From the 1.5 mile marker to the 8.5 mile marker the trail is paved and first passes through a commercial area of Klamath Falls and then the “South Suburban” area. This is the most densely used portion of the trail and local people walk their dogs, roller blade, ride bikes, jog, walk – you name it. On a nice day I’ll encounter dozens of people on this section; I frequently ride my road bike on this section but generally don’t run there because I prefer to run off pavement plus I like to run with my little cow dog, Ringo, off leash.

My favorite and (personally) most frequently used sections are the section from Reeder Road (6 mile marker) to about the 13 mile marker (past Olene,Oregon) and of course the Switchback Mountain section near Sprague River, OR.

Olene is a “town” that has about three or four houses and one store. There is a nice parking area there that I use as a headquarters for long runs (like the twenty mile runs that are part of a marathon training program). I will do a number of “out and backs” starting in Olene and use my truck as a resupply depot to refill my hydration pack after ten miles or so, and also restock things like carbohydrate gels and electrolyte supplements.

Horse riders often like to park their trailers here and start their trail rides in Olene, including people with tiny miniature horses they use to pull little carts. 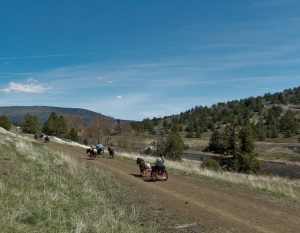 Another good starting point is the picnic area at Switchback Mountain near Sprague River, Oregon. This is a unique section of rail trail – the train would do a “double Y” switchback in order to get over the mountain – as far as I know it was the only railroad in the United States that did so. This is the only hilly section of the trail and for that reason is a great place to train if a hilly race is in my future. Plus it is adjacent to “Devil’s Garden” which as one might imagine is an area of spooky lava rock formations – a fun place to explore. Switchback Mountain is thirty-five miles from Klamath Falls so it only works as a starting point if I have enough time to drive that far.

The actual quality of the trail surface is quite variable and runs the gamut from exquisitely paved to extremely overgrown and rocky. The highly used areas are generally very peasant to run on – but once the trail gets past Sprague River, Oregon there are a lot of hazards including large clunky chunks of ballast rocks, overgrown weeds and sagebrush, and of course cows.

I have been chased, once, by a young bull out there. Mostly I encounter herds of cattle that just stare and refuse to move, or else they follow me after I pass. In general they don’t mind me, but it’s my cow dog they could do without.

After Work Ride Near Olene

Other animals along the trail include the usual suspects for our area – jack rabbits, coyotes, badgers, deer, antelope, mountain lions, bears, turkeys – but primarily cows and horses.

I’m attracted to the Oregon Outback ride because I’m intrigued to keep going, to break past the limited area that I’ve been running and explore the entire state beyond the OC&E trail – all the way to the Washington border – wow. Sounds like a great adventure.